Stories From Behind the Camera:

The World’s Most Iconic Portraits

Some iconic portraits last longer in the mind because of the subject. There’s nothing more interesting to people than other people. In our inaugural insight of ‘Stories from Behind the Camera’, we will look at some of the world’s most iconic portraits and reveal the interesting stories that made them famous.

Sharbat Gula is captured by photojournalist McCurry in a Pakistani refugee camp during the time of the Soviet Union’s occupation of Afghanistan. Although, Sharbat wasn’t identified as the girl until 2002 by which time she was in her 30’s.

This iconic portrait is respected for a number of reasons. Some cite it is the ‘Mona Lisa of the Third World’ and others say it is a depiction of oppression on society. This photograph was first published on the front cover of National Geographic in 1985 and became an instant talking point. Gula’s red headscarf and the green background is striking, along with her piercing stare underlining McCurry’s ability as a photojournalist.

Gula was eventually credited as the Afghan Girl in 2002 using iris recognition technology. She can still remember the moment that McCurry took the photograph. 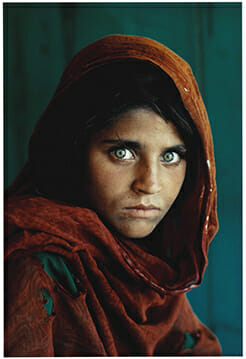 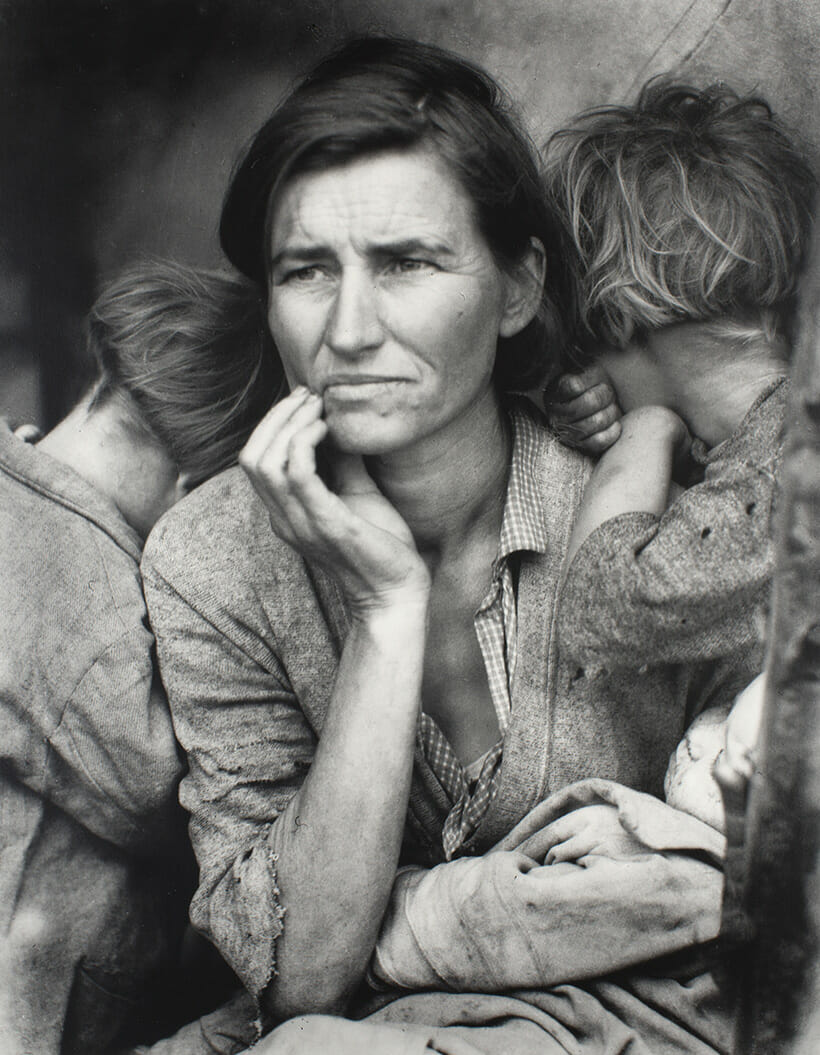 Taken in the middle of America’s Great Depression, Lange’s portrait of Florence Owens Thompson and her children shows the effects that hyperinflation and lack of employment had on the American people during the 1930s.

Thompson was only 32 in the portrait but is often mistaken for a lot older. Many attribute this to the stresses and strains of raising 7 children whilst living through a national economic disaster. Her pained and worried face sources from the fact her family are out looking for work when their car breaks down, leaving them in a pea pickers camp.

Lange, who worked for the government at the time as a relocation officer, arrived and took 7 photographs of the Thompson family. Again, like the McCurry portrait, Thompson’s name was not recorded in Lange’s field notes. Instead, there was a 40-year gap before she was identified as the subject.

After being located, Florence Owens Thompson was quoted as saying “I wish she [Lange] hadn’t taken my picture. I can’t get a penny out of it. She didn’t ask my name. Said she wouldn’t sell the pictures. She said she’d send me a copy. And she never did.” Lange was funded by the government when she took the iconic portrait, so the image was in the public domain and Lange never received any royalties.

The remaining 6 portraits of the family can be seen here.

The Vulture and The Little Girl by Kevin Carter (1993)

Probably one of the more harrowing and saddening portraits taken in recent times was captured by Kevin Carter during the famine of Sudan. The picture picked up a Pulitzer Prize for its heartbreaking illustration of a vulture stalking the weakened body of a young Sudanese child Kong Nyong. It is heralded as a need to react to the situation in Africa.

The famous portrait was taken by Kevin Carter whilst on assignment covering the drought and famine with colleague Joao Silva. After Carter took the shots he chased the vulture away, leaving immediately after for his flight. Unfortunately, the image had a profound effect on him as he was regretful he didn’t help the child more. 4 months after being awarded the Pulitzer in March 1994, Carter committed suicide. In 2011, it was reported by her father that Kong Nyong had passed away in 2007. 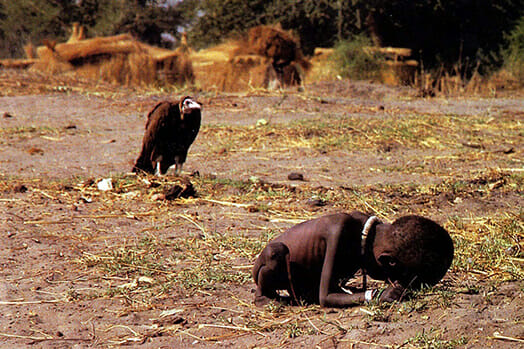 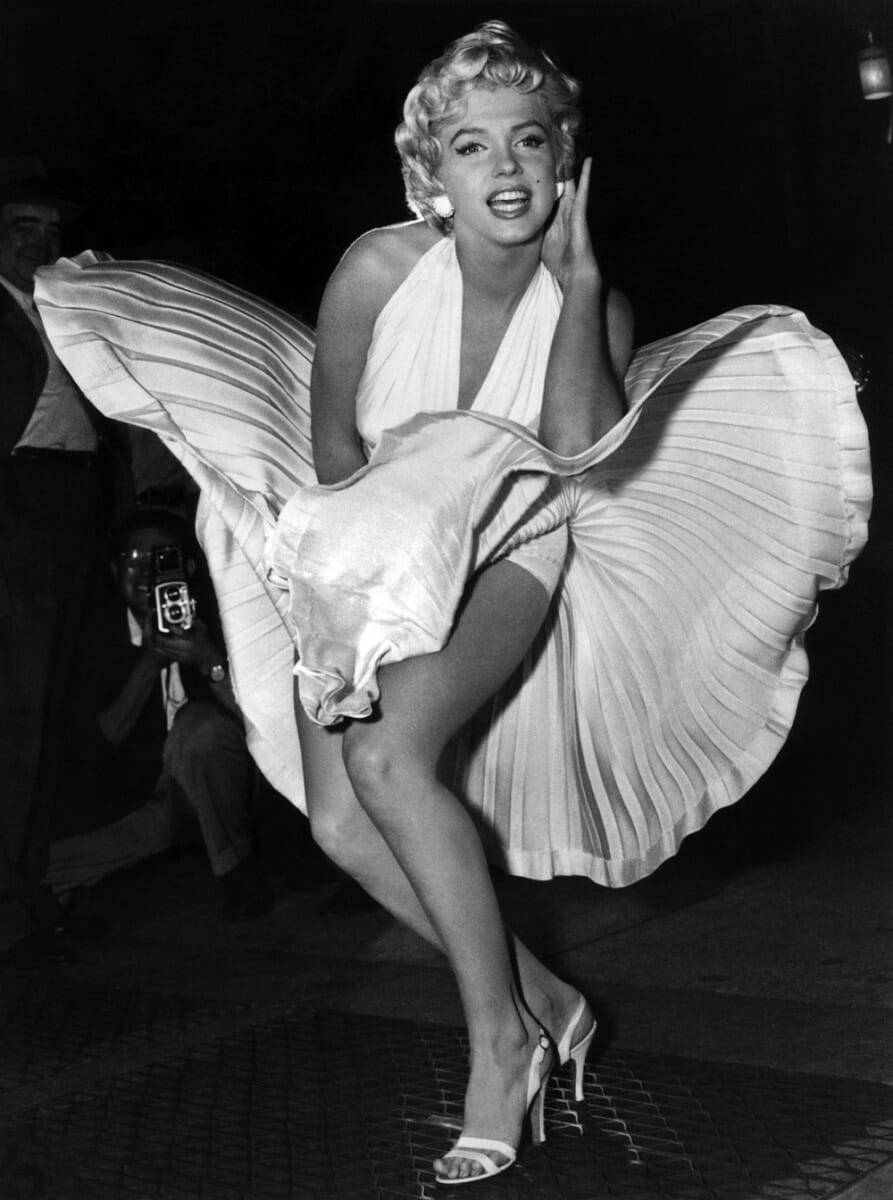 Sam Shaw was a stills photographer working on the film 7 Year Itch when he captured the iconic moment known as the ‘Flying Dress’. Many believe this is a paparazzi moment (as a second staging of this event was held again for the press).

But the truth is that Shaw and Monroe had been very close friends for years prior to this moment. In fact, they would travel to the film set every day together.

The moment was all scripted too. Monroe’s character was to exit a movie theatre and stand over an air vent whilst the underground train passes, creating a plume of steam and revealing her bare legs. In the posed photograph Monroe can be seen mouthing in the direction of Shaw, she said ‘Hey Sam Spade!’ (her pet name for Shaw).

Though it may not seem racy or controversial nowadays, but in the 50’s this moment was iconic as Kim Kardashian appearing fully nude on the front cover of PAPER magazine.

Monroe’s fame as the jewel of Hollywood shone brightly as this portrait displayed her playful, teasing mannerisms which captivate so many male audiences. Whereas the truth was that Monroe struggled daily with depression.

Translated to English as ‘Heroic Guerrilla Fighter’, Alberto Korda’s portrait of Che Guevara is probably one the most reproduced portrait in our list.

You’ll most likely to have seen it printed onto t-shirts and posters re-affirming the idea that Guevara was the poster boy hero of Cuba.

Guevara’s charismatic character and rugged good looks made the portrait popular, increasing his fame amongst his countrymen during the Cuban struggles.

The portrait has been likened to a symbol of freedom and has been reused numerous times during conflicts across the world.

Korda took the photograph during a memorial service that President Fidel Castro arranged to honour the victims of the Havana Harbor killings.

Guevara stepped in to view for just a few seconds for Korda to snap the portrait before he quickly disappeared.

Even Korda recalled that “this photograph is not the product of knowledge or technique. It was really a coincidence, pure luck”. 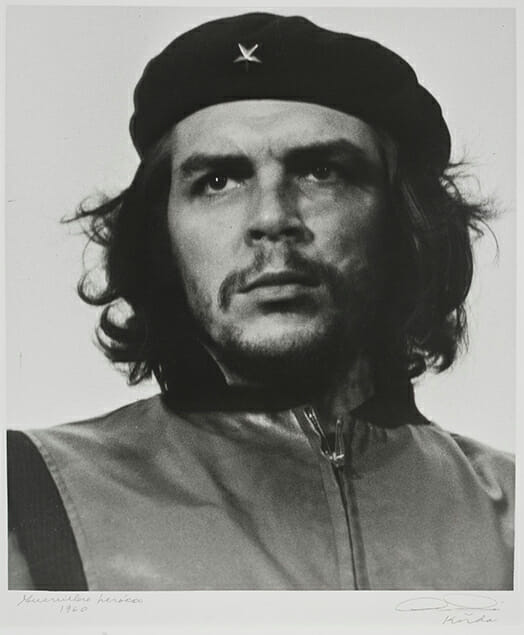 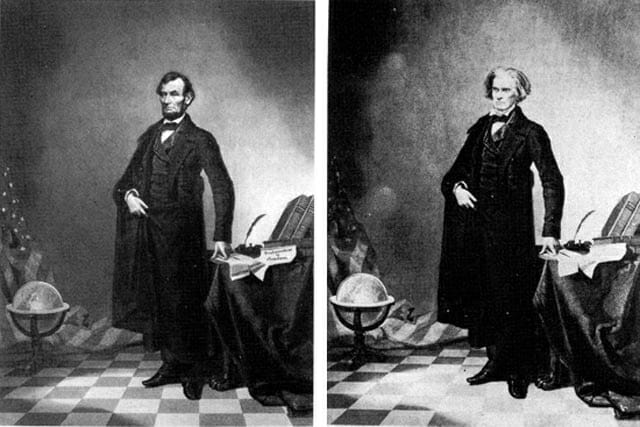 This is the one portrait on our list that isn’t a natural photograph which is ironic given that it is the oldest image of our list.

Lincoln’s portrait was actually a composite using the body of another politician John C. Calhoun. A lot of Lincoln supporters felt that, though his ideologies were popular with the voters, he didn’t look very presidential. Henceforth, they wanted to create an everlasting image of him appearing to be heroic. This iconic portrait of Lincoln was published multiple times after his death in 1865 with the aim to perpetuate this heroic status.

Though this forgery of sought was groundbreaking when discovered, it has been common practise for iconic figures to be given a more impressive appearance prior to the digital age. Portraits of General Ulysses S Grant, Josef Stalin, Benito Mussolini and Adolf Hitler have all been doctored in some form to improve the image and myth of their character.

Scottish photographer Watson was hired by a magazine to capture a series of images about the most powerful people in America – enter Steve Jobs.

Jobs was notoriously camera shy and disliked photographers making Watson’s job more challenging. However, he overcame the first barrier by telling Jobs the photo shoot would only last 30 minutes, instead of an hour.

It was a very clever ice-breaker, instantly relaxing Jobs and curry favour with Watson. Consequently, the photo shoot in the end only took 20 minutes.

Watson approached the idea like a passport picture – plain background and no smiling. Jobs was told to look in to the camera and imagine you’re facing 3 or 4 people who disagree with you but in your head, you know you’re right.

Steve Jobs said ‘that’s easy, I do that every day’.

The authoritative look of Jobs in the portrait affirmed his iconic status as the founder of Apple and displayed this powerful character masked within a frail, mortal frame.

As a result, Jobs said it was the best portrait ever taken of him. Apple went on to use this image to announce the death of Jobs in 2011. 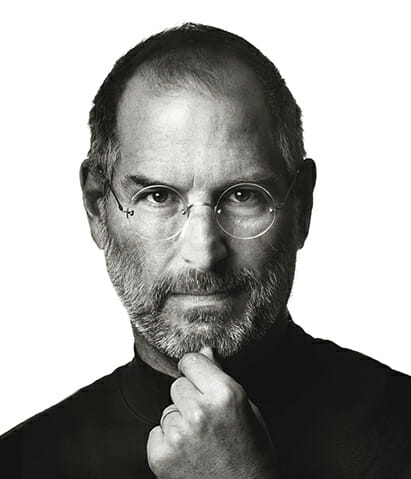 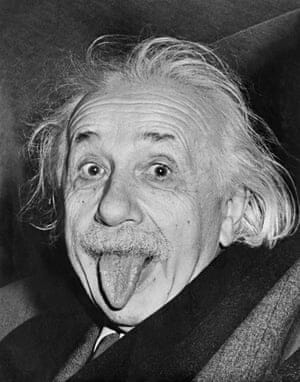 The scientific personality of Albert Einstein was not known for wacky expressions which makes Sasse’s portrait of him during his 72nd birthday an iconic, yet rare, image of this genius.

Lots of smiling photographs had been taken of Einstein during the day of him happily enjoying his celebrations. However, Sasse wanted something different in his portrait. Instead, Einstein stuck out his tongue in a light-hearted moment breaking the hard, stoic image of a revered mind.

The portrait became an idiom in later years and consequently the idea of the ‘mad scientist’ lovingly arose from this moment. His wild, unkempt hair and wrinkled face added to the feeling of a misunderstood genius whose work we wouldn’t come to understand or prove for years after. Einstein, like Steve Jobs, loved the photograph and asked for numerous copies of the portrait. In 2009, an original signed copy of the photograph sold at auction for nearly $75,000.

In the middle of World War 2, Prime Minister Winston Churchill found himself walking into a photo shoot during a visit to the Canadian parliament in Ottawa.

Though agreed by his advisers, Churchill had not been told Karsh was assigned to take his picture that day.

Churchill walked on to the set as Karsh turned his lights on startling his subject. To which he replied ‘Sir, I hope I will be fortunate enough to make a portrait worthy of this historic occasion’. In short, Churchill’s response was ‘Why was I not told?’, from which a few murmurs of laughter broke out amongst his entourage.

The ever-present cigar was lit as Churchill allowed Karsh to ‘take one’ photo. Karsh wanted to dispose with the overly associated cigar but Winston was not forthcoming.

Karsh played the waiting game until his time was up. Afterward he simply walked up to Churchill, asked for his forgiveness, yanked the cigar out of his mouth and then took the shot.

The reaction that Karsh captures of Churchill is perfect.

His eyes are disapproving, his body language demanding and impatient. It was an iconic encapsulation of this war hero Prime Minister. 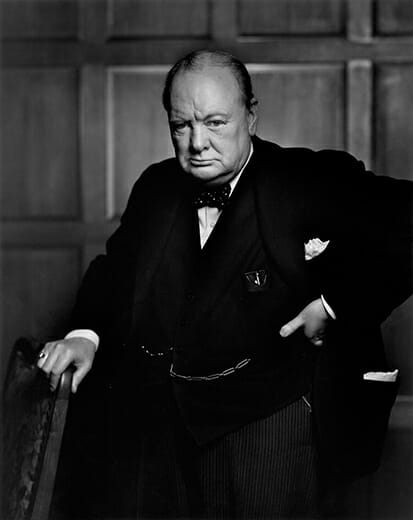 If you’ve got an interesting and rarely told story about iconic photographs then we’d love to hear them! Send us a message to our iPhotography Facebook, Twitter or Instagram pages.

To reward our 90,000+ students in the iPhotography community, the Course Tutors give out prestigious titles daily including; #POTD (Picture of the Day) or the #WeekendChallenge winning crown. 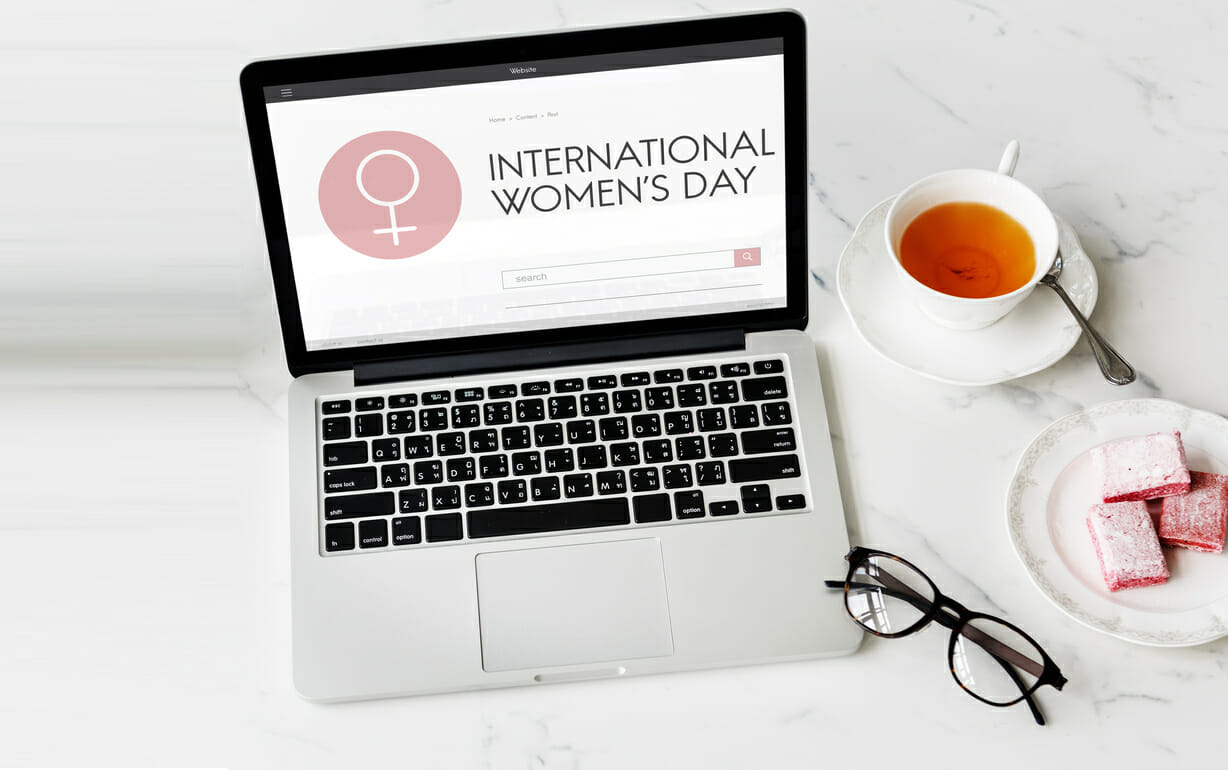 International Women’s Day is March 8th and we want to help promote this great day by looking into how famous female photographers portray women. 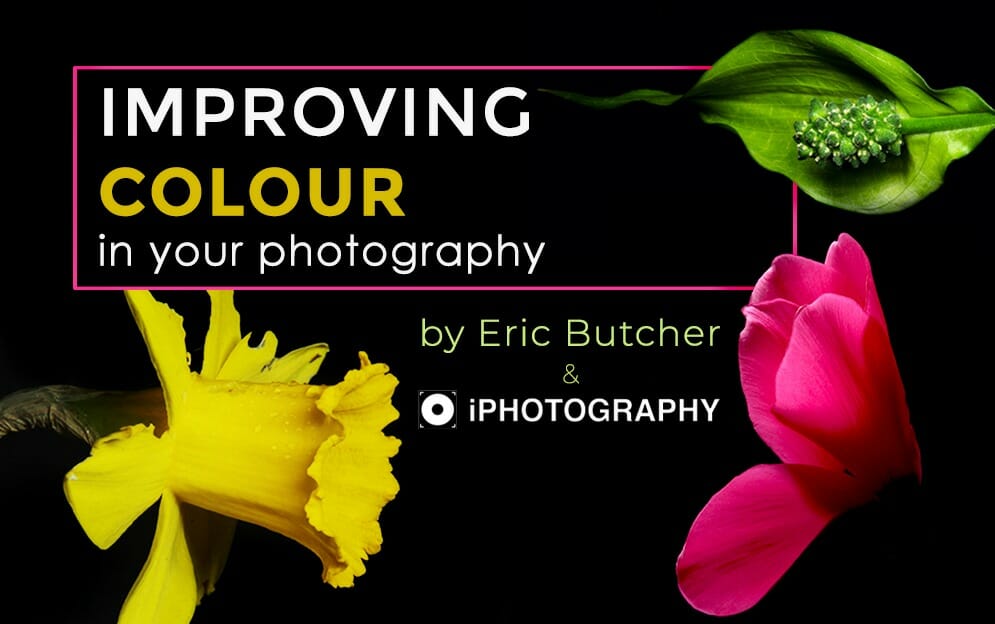 Improving Colour in your Photography

Join Eric Butcher and iPhotography as we demonstrate, for beginner photographers, simple props and techniques to improve colour in your photography.